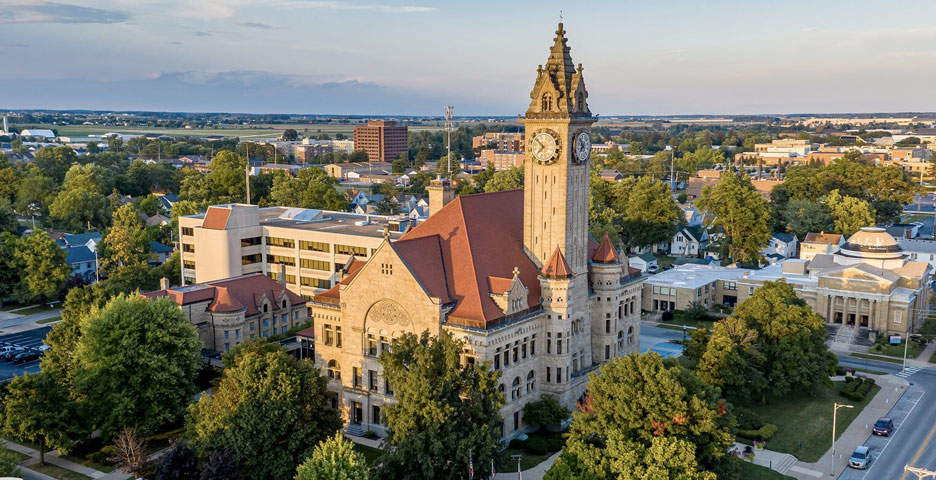 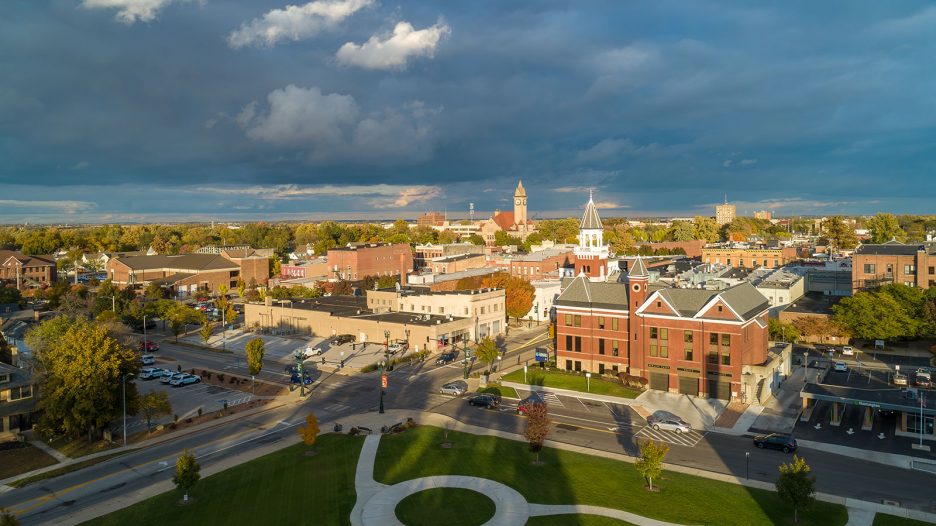 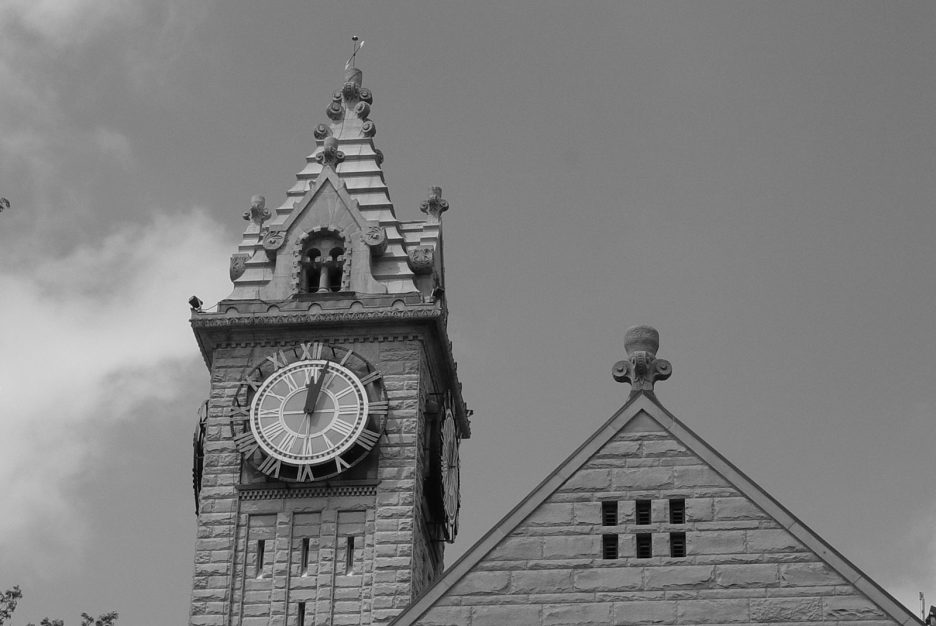 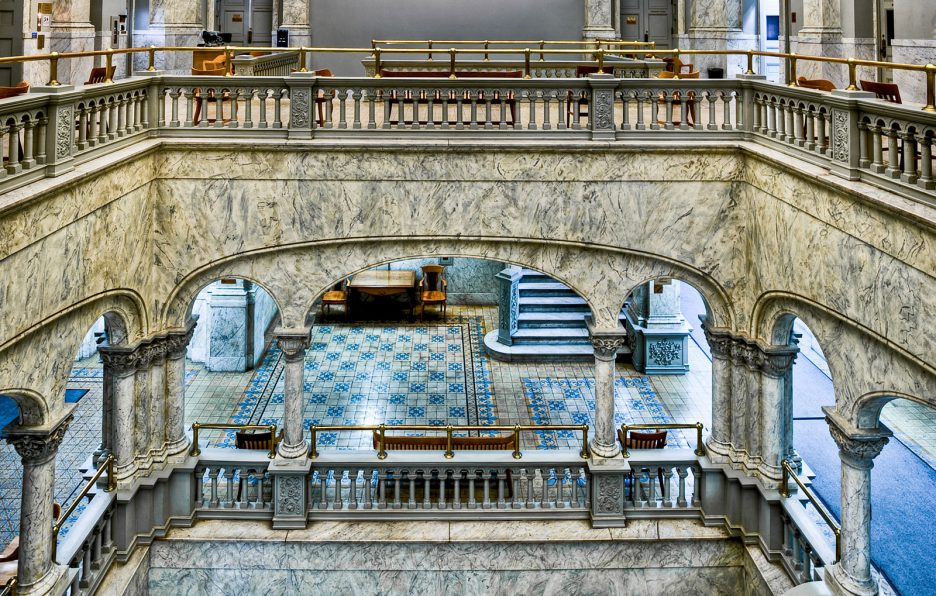 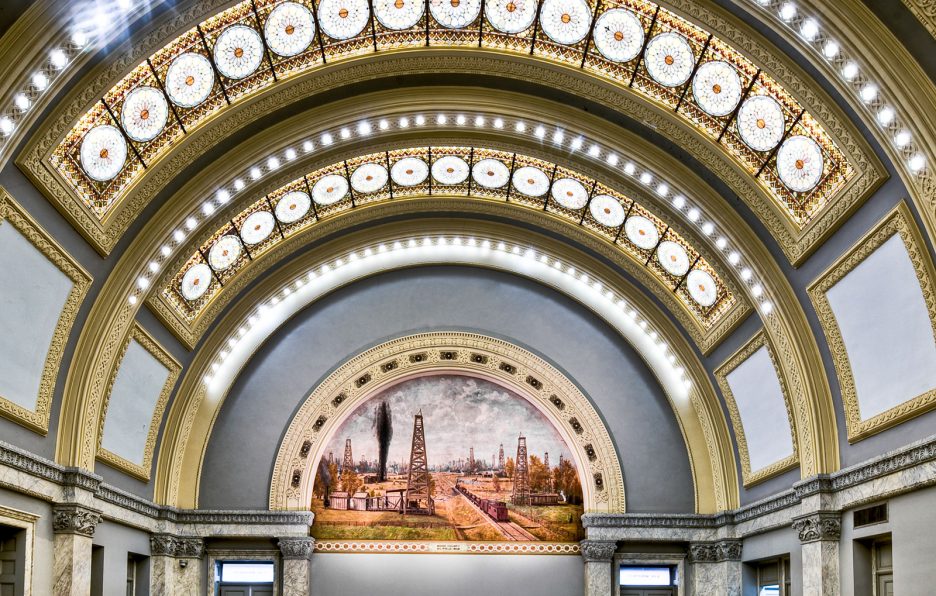 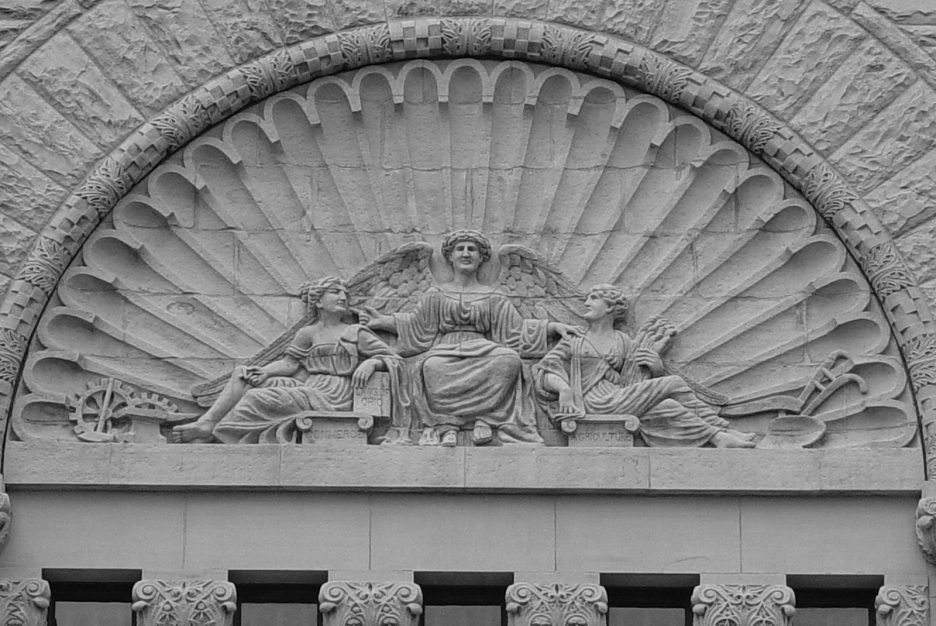 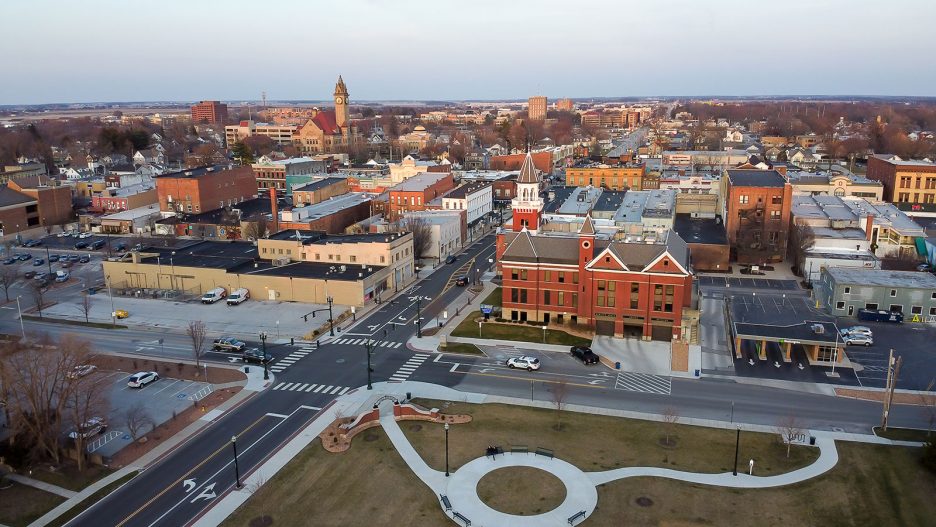 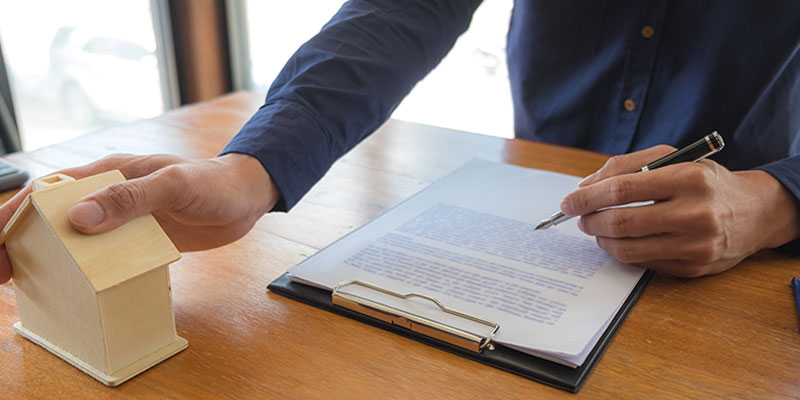 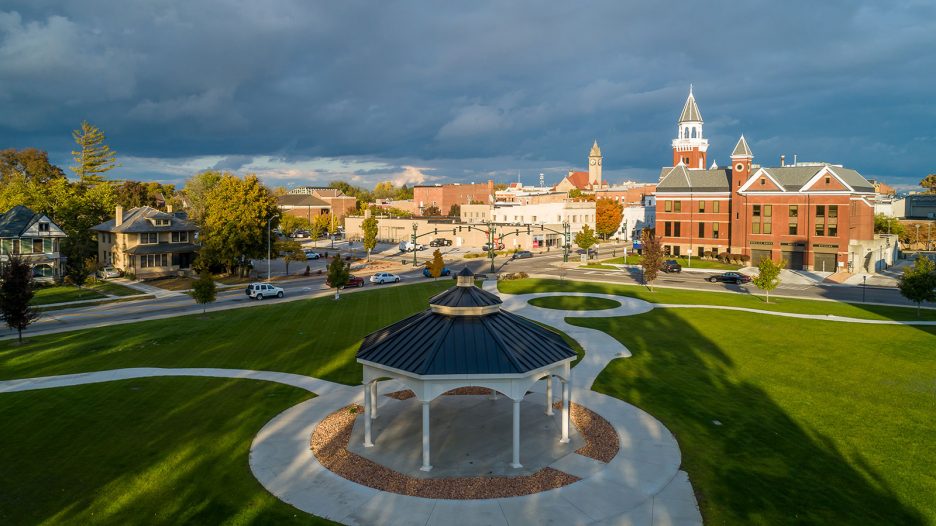 History of the Courthouse

Petitions, which were circulated throughout Wood County in January 1893, requested legislation authorizing the erection of a new courthouse. The enabling act, in effect February 2, 1893, permitted county commissioners to erect the building and issue bonds not to exceed $200,000.

Ground for the present courthouse was broken November 28, 1893, but inability to get lake sand that winter delayed work on the foundation until March 15, 1894.

An estimated 15,000 people thronged to Bowling Green for the laying of the courthouse cornerstone July 4, 1894. Three special trains carried a total of 3,400 people to the county seat that day.

All three county commissioners, a former commissioner, the architectural firm, and the general contractor were indicted June 4, 1895, in connection with courthouse construction.

On June 27, 1895, three commissioners were found guilty of misconduct in office in employing the courthouse architect without acting in conjunction with the Building Committee.

The judge removed two commissioners from office on July 20, 1895, but the Ohio Supreme Court reversed the convictions the following March 31.

The prosecuting attorney on December 2, 1895, nullified all the indictments against the county commissioners and the two contractors “which have not already had trial.” County commissioners, on August 31, 1897, accepted the new building, and county offices were moved the next two days.

The new Common Pleas Courtroom was dedicated September 7, 1897, but the new building was never dedicated. There was a so-called re-dedication November 1, 1981.

The E. Howard Watch and Clock Co. made the huge tower clock for $3,000. The bells weighs 2,000 pounds and the hands spread to a diameter of 17 feet. The hands were the second largest on an American clock, exceeded in size only by the 17.5-foot dials on the Chronicle newspaper building in San Francisco. Before our courthouse clock was made, the second largest one in the United States had been on the Board of Trade Building in New York. Its dials were only 12.5 feet in diameter.

The clock had been guaranteed to vary no more than 10 seconds a month. A few months after it was installed, a Bowling Green newspaper reported the clock “goes when it pleases and makes its own time.”

The Original hands of the clock reportedly were made of basswood-not of wrought iron as spelled out in the contract. The present ones are of metal. Hands of the clock were apparently frozen during the blizzard of 1978. Each of the four faces of the clock has 12 electric light bulbs, one for each hour stop. To replace a burned-out bulb, a steeplejack has to climb the treacherous steps to the tower and then walk outside on a narrow ledge. The bell tower rises 195 feet above the ground level. To enter the tower one must ride the elevator to the attic, and then ascend 195 steps. These include three floors of steep steps, followed by three steel ladders.

A little shanty just below the faces of the clock houses the mechanism. A huge arm with a sledgehammer on the end strikes the bell. An electric motor replaced the weights that originally activated the clock gears.

Plans to purchase the “second largest clock in the world” were announced September 27, 1895, but the clock wasn’t ordered until July 20, 1897. The bell did not strike the time until January 30, 1897, and the hands were not installed until later.

Finishing touches on the courthouse were completed April 10, 1897. Stone carving was the final project.

Ignoring the committee, the commissioners contracted, May 3, 1893, with the Columbus architectural firm of Yost & Packard. T. B. Townsend, Zanesville, on November 2, 1893, became the general contractor with his low bid of $153,803.08. City Council granted permission on October 3, 1893, for temporary railroad tracks along Pike Street to the courthouse. About 750 carloads of building material were eventually delivered on that switch.

Before the old courthouse was razed, county offices were moved into temporary quarters leased in the then-new City Building.

The style of courthouse architecture is modernized H. H. Richardson Romanesque. All the massive walls rest on solid rock.

The sandstone was from Amherst, Ohio, and the granite from Vermont. Limestone was used for steps, platforms, and doorsills while marble appears in various places. The architectural sculpture was done by the Dayton firm of Whyte & Priest, with W. D. Priest the supervisor.

Here is an 1897 explanation of the courthouse stone carving:“There are several allegorical subjects among the different designs. The springers for the main arch represent the strong arm of the law crushing out vice and corruption, the animal representing the law and the snake under his foot vice and corruption; the stops at the ends of the label molds represent avarice, sprays deprived of its prey by the law, starves, which is illustrated by the biting itself. The outside architrave mold in the vestibule represents unity, there being three sprays in each circle interlaced together; the heads at the top in the same course represent (in art terms) autumn and winter, the matron representing autumn and the old man winter. The inner architrave represents evil in the meshes of the law and is illustrated with animal being tied in with a design of interlaced work.”

The grand stairway has polished marble steps and electro-bronzed railings. The Athenian marble finish on the columns surrounding the stairway opening was “of recent origin” when the building was constructed.

The bronze-finished chandeliers were made for either gas or electricity by the Western Gas Fixture Co., Toledo. Furniture of quarter-sawed white oak was manufactured by M. Ohmer’s Sons Co., Dayton.

Taylor, an artist and the 1911-1920 mayor of Bowling Green, painted the two large murals on the third floor. (He was the grandfather of Harriet Cunningham, retired teacher at Bowling Green Senior High School.) Fort Meigs is portrayed on the east wall and railroad tracks and oil wells south of Portage on the west wall.

Bowling Green newspapers late in 1897 referred to the building as “the county’s new palatial temple of justice,” “grand beyond any anticipation,” “and “as magnificent a piece of architecture as you will ever deserve to see.” Green County officials said in 1900 that they liked the Wood County Courthouse the best of such building they had see in Ohio and Indiana. A book salesman who had visited half the American courthouses rated the one in Bowling Green as his favorite.

Courthouse office crowding was relieved after the 1975-1977 construction of the Wood County Office Building. That five-story structure behind the courthouse cost $4,442,00. Now the courthouse has only court functions, and not all of them.

Courthouse restoration from 1979 to 1981 totaled $3,217,778. Thus it cost 12 times as much to restore the building, as it had to erect it about 85 years earlier. The restoration was financed by federal revenue sharing money and the county’s piggyback sales tax, with no property tax involved.

A variety of work was done in the 1979-1981 courthouse restoration:

Daniel Hubbell and Guy Nearing submitted the successful $895 bid to construct the first Wood County Courthouse. It was built of logs in 1823-1824 in Perrysburg on the south side of West Front Street, about 200 feet west of Louisiana Avenue.

The second courthouse at Perrysburg was a Roman-Doric structure of basilica style. The two-story brick building was on a stone foundation. There were four two-story columns and a cupola.

Started in 1837 and completed six years later, the building was at the northwest corner of Walnut street and West Indiana Avenue. The cost was $20,000 and the contractors were Loomis Brigham and Jairus Curtis.

After the abandoned building burned on April 23, 1872, the Perrysburg Township Hall was constructed on the site. The site is now occupied by the Perrysburg Municipal Building and Jail.

The county jail behind the courthouse was completed in 1902. Its $49,551.70 cost was financed by levy funds. Voters at a special election December 18, 1900, approved the issuance of $50,000 in bonds. The victory margin was only 124 votes. The Fremont firm of Fronizer & Andrews erected the building after the May 21, 1901, groundbreaking. The courthouse was placed on the National Register of Historic Places in 1973 and the jail the next year. The jail was vacated in 1990 when the Wood County Justice Center on East Gypsy Lane Road was completed.

From the Journal of the Northwestern Campaign of 1812-1813
under Major-General Wm. H. Harrison
by BVT. LIEUT.-COLONEL ELEAZER D. WOOD
Captain Corps. of Engineers, U.S. Army
Annotated and Indexed by Robert B. Boehm and Randall L. Buchman
(Reprinted with permission)


*Brevet rank was a temporary service in a higher rank.